Dr. Ibrahim was Principal research scientist and external research liaison for Kraft Foods R&D with Universities for research projects related to molecular biology and bioprocessing. He holds three bioprocessing patents and several publications. After retirement from Kraft Foods he formed his own biotechnology company providing technical and marketing consultation for startup biotechnology in United States / Overseas and a key note speaker / workshop for both international food science and bio pharmaceuticals conferences. Dr. Ibrahim received his B.S. in Biochemistry with honor and two M.S. degrees in Industrial fermentation and in Microbial physiology. He received his Ph.D. in Basic Medical Science (Microbiology, Immunology and Molecular biology) from New York Medical College. Since 1979 he is a member of American Chemical Society, American Society of Microbiology, and Society of Industrial Microbiology

Majda Ortan, ing., is Slovenian enterpreneur, known per comprehensive offer of herself developed and produced breakthought innovative, sustainable, effective Natural Bio-Quantum Biostimulanus, which do not contain active substances. Before 8 years she succesfully placed on Slovenian market 61 of those her products, under brand Cora agrohomeopathie Ã‚Â® and from Istitute for Organic Farming, Faculty for Agriculture and Life Sciencies, University of Maribor, obtained certificates of conformity which compliance that 61 of these products are also compliance for use in organic farming. After 7 years of their sale on Slovenian market, she runs activities to market them on worldwidw markets, where will be available under the brand AHAC ENQP TM. She expanding her unique knowledge, gained experiances, rare skills development, achieved best practices on her SAE ENQP TM Academy TM and so contribute to expanding invaluable knowledge in the field of strengtheneng Agricultural & Horticulticular plant's own vitality, own imunology and thus implicite also own resistance on the level of their Life forces. Hanee M. Al-Dmoor, Prof. of Food science & Technology at Nutrition and Food Processing Department in Al-Balqa Applied University. Prof Al-Dmoor an international expert in Food Science and Technology , has published more than 45 papers in reputed journals and has been serving as an editorial board member of repute and an author of 2 books in Ã¢â‚¬Å“Food Science & TechnologyÃ¢â‚¬Â in Arabic language . Prof. Al-Dmoor is a recognized pioneer in development of food science technology at international, national and MENA region countries levels and involved as a researcher, trainer and technical consultant with public, private and non-profit food sectors.

Mr. Muhammad Usman, Former Director General of Agricultural Research System, Govt. of Pakistan who retired from service after a spotless career of about 32 years (from Jan 4, 1977 to Feb 2, 2009) with senior level experience work on the research and development of integrated agricultural industries like livestock and dairy development, aquaculture and fishery, apiculture and poultry, crops, seed and bioenergy on a sustainable way.

Basically, Mr. Usman is an Agricultural scientist, specialized himself on the improvement and advance breeding methodology of food and feed legumes from (ICARDA) from March Ã¢â‚¬â€œ June 1990 at Aleppo-Syria, release several varieties and has more than 60 publications. Ã¯ÂÂ¶ During the service, Mr. Usman was responsible for Management, Monitoring, Evaluation, Planning of project, financial activities and the research work conducted in Pakistan as per training obtained from the University of Queensland-Australia during February 1993. 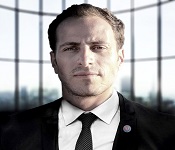 Mr. De la Parra is an entrepreneur focused on Information Technology, Education and Health. He is creative, results-driven and has 16+ years of Digital Strategy experience in architecture and implementation. Mr. De la Parra serves as Chief Information Technology Officer and is a member of the Advisory Board at the Kala Institute. He is the COO and Co-founding Partner at The Solomon Brokerage Firm and leads as CEO at Mass Media Division and at De la Parra Mobile Solutions. He is the former President & Co-founder of PetroM Renewable, and served as Vice President of Operations & Strategy at PetroM Corp across all of its divisions, including PetroM Logistics. He is the former COO & Co-founder at RegenerAge Clinic & RegenerAge Beauty. Mr. De la Parra is the former CEO & Founder at Astrum Salud MÃƒÂ³vil and its Telemedicine service Astrum MÃƒÂ³vil, former Digital Strategy Director & Co-founder at Dr. Jois, BiorganicAging, What Skin Needs/WSN International Pty. Ltd. He also served as a member of the Board of Advisors and is former Chief Marekting Officer at ReAnima Advanced Biosciences and served as Digital Media Director at Bioquark, Inc. He also served as the Latin America Region Manager and Digital Strategy adviser at CardiacSense and is former CITO & Senior Partner at Cerezo Editores. Within the academic and educational fields, Mr. De la Parra acted as the Executive Vice President: Executive Chairman of the WAMS Mobile Health Division, WAMS Chief Coordinating Officer, a member of the WAMS Executive Council (WAMS Executive Board), a member of the WAMS Education & Training Board (ETB), a member of the WAMS Editorial Board, an Honorary Member of the Academy Faculty FWAMS, an Honorary Fellow of the Academy & is also a Senior Partner at WAMS, The World Academy of Medical Sciences. He is also an Advisory Board member, functioned as the Chief Operating Officer and is a Co-founding Partner at The Reprogramming Medicine Association. Mr. De la Parra is also a member of Singularity University and of OpenExo. In relation to the organizations that Mr. De la Parra has collaborated with for social impact and empowerment, he is a member of the Laurentia Project and of Cerebro Mexico, he serves as an Advisory Board member of the Lifeboat Foundation, as an Advisory Board member of the Future Worlds Center Ã¢â‚¬â€œ Cyprus Neuroscience & Technology Institute (Senior TV Program), while also being a Federated member of the International Longevity Alliance and a member of the Transhumanist Party. He is a voting citizen and is running for Mayor & future Parliamentary Candidate at Asgardia. He is the Chief Digital Strategy Officer and Member of the Board of Advisors at the Transdisciplinary Agora for Future Discussions, a member of the Web Committee at the Life Extension Advocacy Foundation/Lifespan.io, volunteered with SENS Research Foundation for the OncoSENS Program in Digital Strategy, and acted as Digital Strategy adviser at the Major Mouse Testing Program. He also functioned as the founder and former Board of Directors member of Astrum FundaciÃƒÂ³n and was Digital Strategy Advisor for POKI Ciudad OrgÃƒÂ¡nica. He is also a part of the General Member Board at the National Autism Association, the National Fibromyalgia Association, the International Literacy Association, and the United Spinal Association. Mr. De la Parra is also member of several associations for technology including: the World Blockchain Association, the Computing Technology Industry Association, the Internet Marketing Association, the Application Developers Alliance, and the Association of Strategic Marketing. Mr. De la ParraÃ¢â‚¬â„¢s activities in arts & culture involve being the Digital Strategist and member of the Executive Board of Legado Cultural Siqueiros, a member of Sociedad de Autores y Compositores de MÃƒÂ©xico, while also being a member of the Executive Board at Sociedad Latinoamericana de Ãƒâ€œpera. He also served as Digital strategy Advisor at Xicome Festival. He is a media professional at IMDB, SoundCloud and ReverbNation and has had activities in the entertainment industry as music producer, composer & arranger for Televisa with broadcast television, film, radio, and web, receiving international awards with aired content in more than 185 countries. For the energy sector, he worked as the Vice President of Strategy & Operations of PetroM Energy, and is a member of the National Introducing Brokers Association and a part of the National Biodiesel Board (Alliance Program). Elzbieta Patkowska is an Associated Professor of Phytopathology at the University of Life Sciences in Lublin, Poland. She studied Biology at the Maria Curie-SkÃ…â€šodowska University in Lublin, Poland and then got Ph.D. (2000) and Habilitated Doctor degrees (2012) at the University of Life Sciences in Lublin in the subject of biodiversity of microorganisms colonizing soybean [Glycine max (L.) Merrill] and susceptibility of different varieties of plants to infection by fungi with special regard to Phomopsis sojae Lehman. She is interested in the interactions between plants and pathogenic/non-pathogenic microorganisms and the possibility of applying biological methods in plant protection. At present she is concerned with the occurrence, symptomatology and etiology of vegetable plants caused by fungi, as well as with beneficial microorganisms and biostimulants as the factors promoting plant growth and ensuring their resistance to biotic stress.